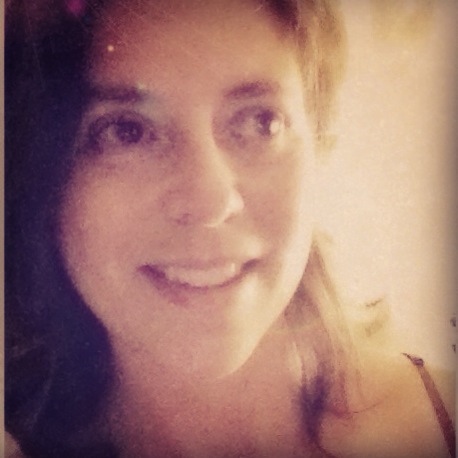 Suzan Pitman is a former high school teacher currently unemployed and hanging out in her pajamas in the greater DC area, having recently relocated there from Texas. She shares her life with husband David, son Matthew, and Piper the Dog. She is currently looking for a highly skilled 9-year-old to write the code for a new game for iPhones, “Pithy Comebacks with Friends.”

It was summer’s high noon—end-of-July, in south-central Texas, with a heat that few brains can really wrap themselves around even if they wanted to. My son, Matt, was two.

It was getting close to mid-morning, which meant that if we were going to spend any more time outside it would be at the pool or the river. As I thought about our options, I realized it was way too quiet. Matt had been crawling out the dog door since he was about 6 months old, usually with an actual dog toy, or the broom (go figure).

I stepped out the back door to find Matt and Mr. Pickles, our banty rooster, in a very silent, very still stand-off. Now Mr. Pickles was not one of those charming, loving, little dog-like chickens that follows you around and eats out of your hand. Mr. Pickles was a thug. He didn’t so much rule the chicken house as he did extort, bribe, threaten, and knee-cap all who dared enter in the chicken house or yard. It was a dirty business. We kept him because he had effectively raccoon-proofed the yard, but under no circumstances should he have been that close to a baby.

Determined not to panic, I reached out and picked Matt up in one big, slow motion, and that was when I saw that Mr. Pickles was soaked. Like he had been standing in the rain. For a while.

I threw a couple of flip-flops at Mr. Pickles to shoo him off, put Matt down and said, “Now, what happened?” And the reenactment commenced. My sweet baby had removed his diaper, peed on Mr. Pickles, and then put the diaper back on. Never, in all of the things I had said to my students, or things I thought I might say to my child, did I imagine I would need to say, 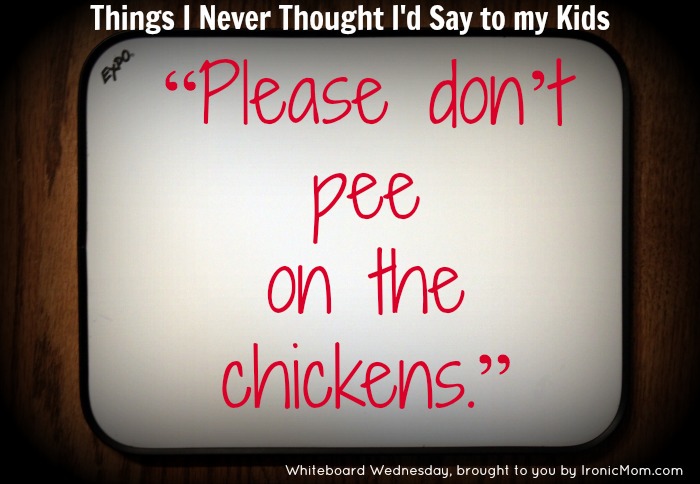 We all know that boys, even the big ones, will pee anywhere, and can you blame them? What shook me to my mother-core was that this child did not ask what would happen if he peed on Mr. Pickles, he just went out and tried it.

He was never one of those endless questions kids, but he has already, now at the ripe age of not-quite-eleven, been caught throwing rabbits to see if they land on their feet like cats, and jumping on the trampoline in snorkeling gear to see if the flippers improve his jump height. He’s had his chin stitched twice (what might happen if I jump the cement curb on the tricycle?), and his fore arm stitched then restitched when he told his PE coach his mom said it was OK for him to play dodge ball the day after slicing his arm open with his new pocket knife. He terrifies and absolutely delights me at the same time.

Mr. Pickles’ last moment in this life was sitting on the fence crowing at the neighbor’s puppy, which, due to a growth spurt, was able to jump up on the fence and eat Mr. Pickles for an afternoon snack. He went out crowing; owning the yard and all that was part of his domain. Isn’t that what we all want?

I did not discipline my child that day, the day Mr. Pickles got owned, other than to ask him to not do that again. It was the day I started to figure out the line between discipline and guidance, and as uncomfortable as the uncertainty of parenthood can be, I’ll live in that space (with Band-Aids and ice packs, and possibly bail money) while Matt pushes his limits.

Confession time:
Where’s the strangest place you have peed?
What about a child you know?