Karyn is a lapsed social worker, work-at-home mom, and one-quarter of Team Pickles. Along with Ben (the thinker), Molly (the doer), and Ian (the Brit), she battles for truth, justice, and the Canadian way in a world where parenting and puns go hand-in-hand. Follow their adventures at PicklesINK and get short bursts of funny on Facebook and Twitter (@karynpickles).

Imagination Has Its Limits

“The world of reality has its limits; the world of imagination is boundless.”

Ben has a wonderfully active imagination. I was okay with it when he was quietly teaching his imaginary preschool class in his bedroom. I was fine with it when it was “Picture Day” every morning for a month and I found hundreds of pictures of empty chairs on my camera. I was even perfectly happy when his friend Manta came with us everywhere we went; at least he had someone to play with if he was bored.

But when his imagination started interfering with everyday necessities, like eating dinner, I had to draw the line – which is how it came to pass that one day, in an attempt to get him to STOP PLAYING FOR GOODNESS’ SAKE, I reached the end of my rope and found myself counting him down, firing empty threats in every direction, and finally shouting: 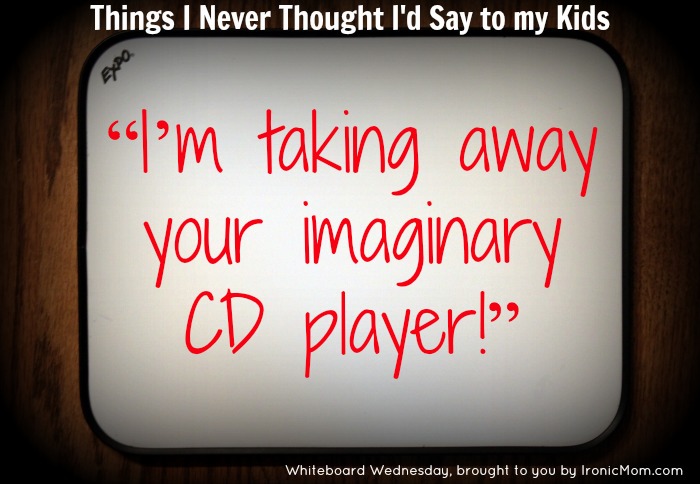 Furious, I grabbed the invisible CD player by its invisible handle and continued, “I’m putting it up on top of the fridge where you CAN’T REACH IT!” Cue the hysterics: Ben threw himself on the floor sobbing, Ian collapsed to the floor laughing, and I remained a stonily calm oasis in the middle of it all.

After a few minutes, Ian collected himself enough to choke, “Oh, honey – Give it back!” I relented and returned the imaginary CD player to the table with a stern warning and Ben pulled himself together and ate his dinner.

Just wait ‘til he’s a teenager and I can ground him by taking away his imaginary car keys.

Your turn:
What’s the weirdest way you’ve ever disciplined your kids? Did it actually work? Did you have any imaginary friends?