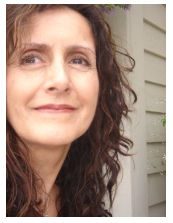 It is my pleasure to welcome a new guest blogger, Alexandra, to IronicMom. Alexandra is a first-generation American who writes memoir and humor for various writing websites. She posts on her blog Good Day, Regular People of life in a small town as the mother of three boys where she tries hard to go unnoticed. She fails miserably. She was named a 2011 BlogHer Voice of The Year for Humor, a 2012 Babble Top 100 Mom Blogger, and 2012 Most Interesting Blogger and Best Female Blogger by Studio30Plus, an online writing community. Part of the nationally acclaimed The Moth Live Storyteller’s Tour,  she is currently seeking a publisher for her memoir Just Visiting. The Real Story of Milwaukee’s First Latino Gang: Tales of an immigrant family and their Colombian bandana-wearing ways.
.

In 1996, I became the manager of a physical comedy team, something akin to the new millenium Three Stooges. I married late in life, and my husband and I had no time to waste with regard to go forth and multiply, so, enter Larry, Curly, and Moe, all born within six years of each other.

I live with The Three Stooges and by 8 AM, the comedy shorts begin. My house is filled with slaps, pokes, bonks, and nose twists. When Curly, Larry, and Moe get bored, their legs and hands wander, to each other’s backs, shins, and heads.

When this physicality began, oh, at about 9 months and 18 months old with the first two, I knew I had to set up rasslin’ house rules.

After 18 years of managing this team, we haven’t had to add any new rules to rough housing. My children know I mean it when I say safety first, and I’ve adjusted accordingly. I don’t hear the sounds anymore of furniture legs breaking or vases tipping over, I don’t see the hands slapping rapid fire on each other’s heads, and I don’t trip as I step over them while they’re rolling over each other like they’re putting out a fire.

It’s my life, and I love it. I’ve changed who I am to include a voice that I can quickly call up to become a knock it out of the ballpark bellow, “GUYS! BOYS! Food stays ON the table!”

My boys are older now, and the level of leg wrestling and body slamming has become more forceful as they’ve bulked up. My ears have been calibrated to Code Orange Alert Level and are set to sensitive range for the sound of crackling bones and dislocated tendons. It’s all in a day’s work of keeping the kids alive and our hospital bills down.

Like I said, this is my normal. I do my household duties and keep one eye on the pasta boiling on the stove, and the other on the WWF tournament going on in the front room. I don’t want to fight my children’s battles for them, so I become part of the wallpaper. It’s a beautiful ecosystem, but one rainy day — the kind of day where the boredom is as thick in the air as apple butter, I knew I had to step in.

I heard an “ungh” and then a “flop” followed by the sight of legs going in a direction that I know has only been achieved in the human kingdom phylum by sheer accident.

Dropping the laundry basket I held on my hip, I lorded over Curly and Moe, who both were holding Larry as if he were a wishbone.

Startled, the boys looked up, because Mom was bellowing like a fog horn and she doesn’t bellow often.

“HEY!” I shouted a second time, they froze.

And then I said something I’d never imagine saying, even as the house manager of The Three Stooges: 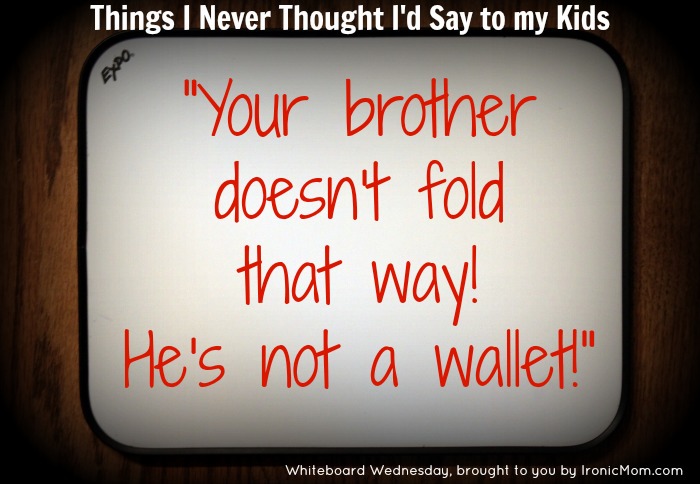 Our House Rules have now been updated for rasslin’ to include Number 4.

4. No folding people like wallets. They don’t go that way.

Your turn:
Did you rough-house as a kid? Do your own kids play fight?