When I was pregnant, the best decision I made was to tell no one the names I was considering for my uterus-imprisoned twins. I did tell my husband, though, which led to many name debates. For the majority of names we bandied about, we tended to respond with one of the following retorts:

Not telling anyone worked for us. Once our babes were born and we did the reveal, few people criticized our chosen names, Vivian and William, at least not to our faces.

There are some soon-to-be parents, however, who would benefit from running the names they’re considering by the Don’t-Beat-Me-Up-at-School, Name-Vetting Organization.

This past week, the province of Alberta released its list of 2010 baby names. The government tracks the names of every baby born in the province and releases this data. The most popular names from 2010 seem to fall into the category of classic-names-that-are-now-trendy. 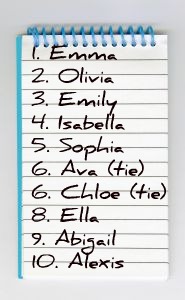 And here are the top ten boys’ names: 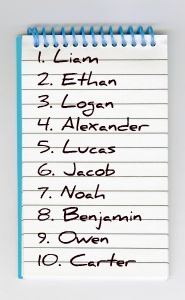 These are not too shocking, in my opinion; I know plenty of kids with these names. But then there were the clangers, the one-of-a-kind names that make you wonder whether many of these parents-to-be froze a substantial portion of their brain cells over a series of long Canadian winters.

Name: Canada
Makes me ask: Would his parents be that patriotic if they lived in Burkino Faso?

Name: Brik
Makes me ask: As in throw a Brik through your window? As in thick as a Brik?

Name: Boomer
Makes me ask: Was he named after the generation he’ll have to support?

Name: Viktorious
Makes me ask: What if the kid’s not athletic? What if he’s the last one picked for sports teams? Maybe his middle name’s Irony.

Name: Gorgeous
Makes me ask: Have the parents forgotten what it’s like to be in Junior High?

Name: Universe
Makes me ask: Will she suffer from “always expanding” jokes?

Name: Palin
Makes me ask: Will she have a Tea Party for every birthday?

Other names recorded on the 2010 Name List include Diamond, Serenity, Elektra-Lee, Infinity for girls. And Duramax, Thatcher, Santana and Famous for boys.

If you want to know how this compares to last year, you can click here to get to my snarky post from last year.

Now I hand it over to you:

What do you think of bizarre names?