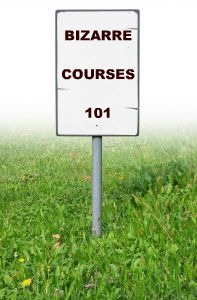 I could teach a course in…

Boiling Water: Turning the kettle on 25 times before you get around to making one cup of tea.

Abandoning Footwear: Leaving your shoes all over the house so others have to hop, skip, and jump around them.

Wine Bluffing: Pretending to know what great wine tastes like when the sommelier pours a small quantity in your glass for you to sample.

Transporting Assignments: Dragging your pile of grading to and from school without ever removing it from the bag.

Cocooning: Spending 10 minutes shifting, stretching, curling up in bed – all to find the perfect position (and then not move an inch all night).

Annoying Baristas: Ordering a drink at Starbucks that has more adjectives than badly written prose.

Epic-Fail Joke Telling: Rehearse by moving your lips, adding creative side plots, and mixing up punchlines.

Judo-Style Arguing: Waiting till your spouse initiates the first complaint and then going in directly for the kill (without even a warm up).

Smiling: At others, at yourself, and at those That’s What She Said jokes, especially the ones you never share.

What courses could you teach?