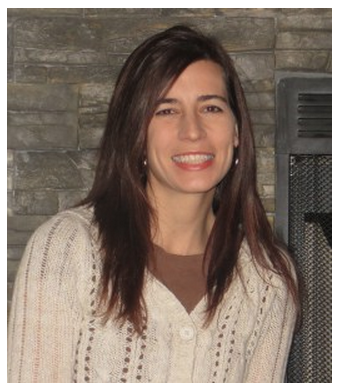 This week’s guest blogger is Kim Harms. Kim lives in small-town Iowa with her husband and three sons. When not focusing on survival in her testosterone-laden household, she writes and runs a clothing ministry for Haitian children. Her work has been published in a variety of magazines and devotionals. She blogs at kimharms.net and 500dresses.org.

Bears on Wheels is a one of Lewis’ favorite bedtime story books. My youngest son loves it because it’s one of those books he can “read.” Mostly my little man just looks at the pictures and states the obvious, but he can almost quote the whole thing verbatim.

“Four bears on one wheel. One bear on two wheels…” You get the picture.

Well, one night not long ago as we were reading the Stan and Jan Berenstain classic, Lewis was a bit distracted by one of those body parts that is ever so popular at our house. His penis. A mom of all boys, I often feel like I’ve been dropped onto another planet as I listen to their conversations and the noises their bodies emit. Though my three handsome boys have (what they deem to be) hilarious nicknames for their various body parts, we do not shy away from using the proper medical terminology either. Penis is just another word at the Harms home.

If you were raised in a home like me where privates were never mentioned, much less joked about, I dare you to say penis out loud ten times. I’ll wait…

It is because I grew up in a household where “unmentionables” were never mentioned that I have decided to be more open (within the realm of appropriateness) with my kids. In other words, I’m not afraid to say the word penis. And we let our boys joke about such subjects as flatulence, poop and the one-eyed trouser snake. When they recently had a 15-minute conversation in the car about whether it’s possible for a person to contort his body enough to poop on his own face, Corey and I just held our tongues and let them talk.

Don’t get me wrong. My sons are not Neanderthals. They happen to be well-rounded individuals who are perfectly capable of participating in normal and even lovely conversations. I shared the above info to give you a framework of the intricacies of the mind of a growing boy.

Now, back to bedtime with Lewis.

On this particular night, his penis seemed to be far more interesting than his book. I think I was waiting for him to count out the ten bears on one wheel when I noticed where his hand was.

“What are you doing?” It was a logical question.

“Look how far I can pull this skin,” he said tugging on his scrotum. 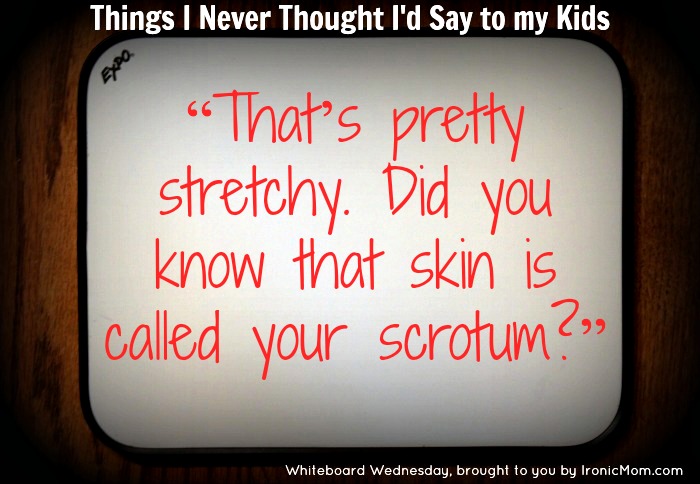 I was trying to be calm and matter-of-fact about my little sweetheart’s display of his manliness.

“Yeah, and it holds my balls in,” he replied. And then, just like his mind had never left bedtime-story-world, he was right back in the book with me.