It is my pleasure to introduce you to this week’s Whiteboard Wednesday blogger. Misty is a lawyer by day, writer by night. In her spare time, she brushes up on her killer ninja skills. She mostly does this by catching unsuspecting fashion tragedies on the streets of her city, and taking their photo unawares. She is stealthy and deadly with a camera phone. You can read all about her trials and tribulations on her blog: Misty’s Laws.

It was football season. My son and I were spending a leisurely Saturday afternoon in front of the TV, watching a college football game. He is 8 years old, and a recent fan and student of the game. Therefore, it is not unusual for any game to be peppered with twenty bajillion questions, shooting rapid fire from my son’s mouth, regarding how the game is played. I have become accustomed to explaining pretty much every play. I am a human rule book.

As we were watching the game on this afternoon, there came yet again a teaching moment. The ball was snapped to the quarterback, he moved back a couple of steps, surveying the surrounding field and looking for a target to throw a pass to. Not finding a suitable player to throw the ball to, he decided to start running.  As he ran, one of the defensive backs from the other team ran towards him and dove forward to tackle him. The defensive back ended up hitting the QB right below his knees, just as the QB was starting to pivot around and turn away from him. And what subsequently ended up happening was that the QB had his legs tackled out from under him, but since he was starting to turn, he actually fell down butt first, and fell on his tackler. It was in essence like he was sitting down on the tackler’s back like he was a chair. Right after he sat on his tackler, the QB popped right back up and ran a few more yards with the ball before getting tackled to the ground for good.

My son, having a basic understanding of the rules of the game, of course had a question about this unusual play.

“Mommy?” he asked. “Why wasn’t he considered ‘down’ when the guy tackled him? Why was he able to keep running and get more yards?”

And because I am a good mom who always tries to educate my son on all aspects of life in general, and in football specifically, I answered his question like this: 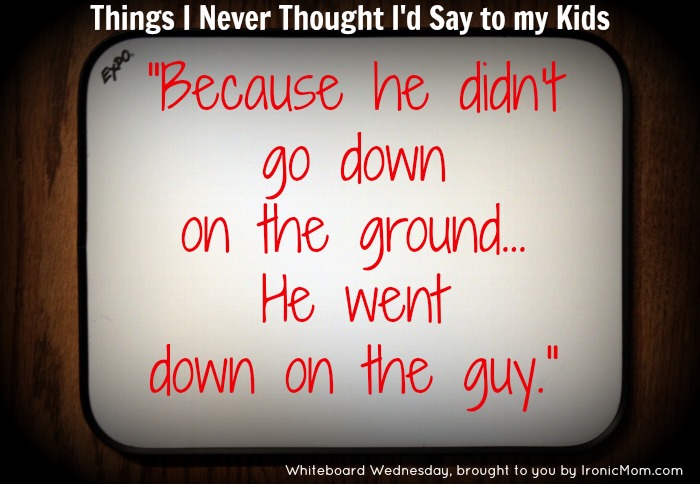