I’ve long since had a fascination with authors. I listen to interviews with them, I read their books and bios, and I send them emails. Yes, I swoon, just a bit but sometimes more.

Lately, I’ve been a bit forward about the swooning. In the past few months, I’ve had some conversations with authors I love. Some of the first lines I’ve used recently include:

“I used to haul grain to Altona” (to Miriam Toews, who grew up near that town and is the author of Irma Voth, ).

“I read your book. I love the s*x scene, the one that you describe in parliamentary language.” (to Terry Fallis, author of The Best Laid Plans)


“Sorry, I’ve exhausted my Arabic.”  (To Izzeldin Abuelaish, author of I Shall Not Hate, after I’d spat out twenty words in his native language).

Now, before you think I’ve gone completely loopy, this wasn’t quite the first conversation I’ve had with him.

A couple of weeks ago, I had this exchange with James (yes, I feel like we’re on a first name basis).

Yes, I’m fawning. For those of you who don’t know Twitter speak, DH = Dear Husband.

Yes, I am one of those people who reveal annoying personal details. He answered, maybe out of pity (or maybe because he’s a nice guy, and he breathes air).

So there you have it.

Kristen Lamb, another published author I swoon over, emailed me and asked if I could help promote this International Twitter Party for the release of James Rollins’ new novel, The Devil Colony, on Tuesday. Kristen could ask me to stand on my head for a day and speak only in Pig Latin, and I’d do it.

So I said yes. After all, it involves Twitter, authors, devils, and parties. 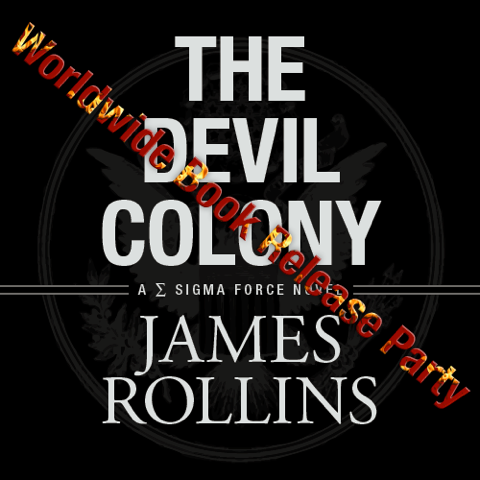 Will you come too?

It’s devil-themed, so feel free to get out your devil garb, make deviled-egg sandwiches, or listen to The Devil Went Down to Georgia or Devil Inside.

While it may seem that I’m inviting you to join a cult, I assure you we’re just going to chat and have online fun together. No sacrificial chickens or bunnies, I promise (but if you want to read about dead animal parts on my porch, go ahead).

So on Tuesday, say hi and congrats to @JamesRollins. He really is friendly, even if you’re a tad loopy, like me. There are even some prizes, including a Nook (if you’re Canadian, that’s Barnes and Nobles’ version of the Kobo). Check out the hashtag #DevilColony. If you’re a writer, this is a great opportunity to hobnob with other authors, agents and editors, who will no doubt be there.

See you Tuesday, with or without your horns on!

In the comments section, feel free to relate anything devilish you’ve done recently. Or any bizarre interactions you’ve had (or want to have) with authors.