It gives me great pleasure to introduce you to Julie.

A mild-mannered accountant from 9-5, Julie’s Frayn’s writer alter-ego comes to life in the off hours. When she isn’t counting beans or making things up in her head, she is mother to two perfect adults. Julie’s first novel, Suicide City, A Love Story, can be found on Smashwords and Amazon.

It was a typical Thanksgiving in 2002. Or maybe it was 2003. 2004? Whatever the year, my kids were young ‘uns, not the full grown adults they are today. It was a time of innocence and wonder. A time of learning and discovery. A time when they bought their mothers ‘interpretation’ about life. A time before they googled everything I said on their darned smart phones and flashed the tiny screen at me, eyebrows raised, to say, hah! Liar…

That thanksgiving was a first for us. We got a free-range, organic turkey. The thing cost more than ninety dollars. ‘Free’ my as…paragus.

When I ripped open the bag I was surprised to find the neck intact and still attached to the bird – not dismembered and shoved into its body with the organs in that little parchment bag. How kind of turkeys to be born with their guts neatly arranged that way, eh? So much easier for us carnivores to pull those gizzards out before roasting their tasty bodies up twice a year.

The kids were hovering, always fascinated and a little grossed out by the turkey cleaning and stuffing process. Their eyes were as big as mine when they discovered that neck, pink and tubular, slightly arced, hanging a good six inches out of the bird.

“What is THAT?” My daughter stood back and pointed.

“Gross!” My son made a silly face.

In my know-it-all voice, I said: 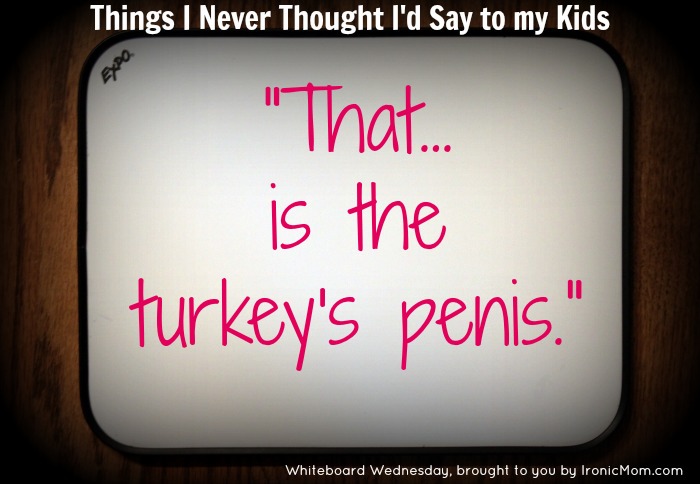 That year I was thankful my kids inherited my sick sense of humour.

Any cooking turkey stories out there?

What have you done lately that’ll put your child on the fast track to therapy?