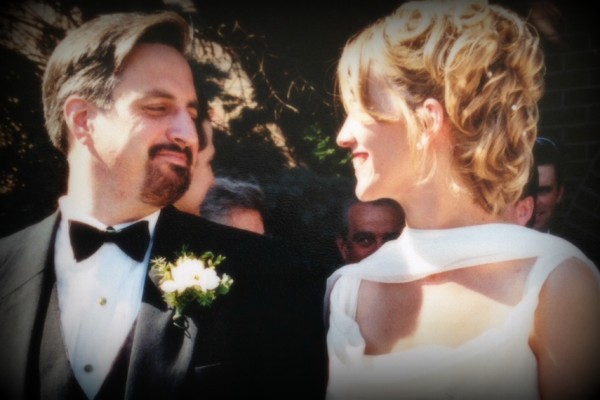 That was fifteen years ago today.

This is how our anniversary played out this morning.

I adjust my duvet cover and look at Chris, who’s half a kilometre away in our king-size bed. “Hey, Happy Anniversary,” I say.

Chris adjusts his own duvet cover. “You too. Fifteen years married to the same woman,” he says. “Bummer.”

I put on my glasses so I can roll my eyes more clearly.

Chris continues, “I should get a medal for being married to you that long.”

I say, “Well I should be sainted.”

Our son William saunters into the bedroom and grabs the sequestered iPad.

Will avoids eye contact and says “okay,” like I’ve just told him the school bus will be here in five minutes. He leaves with the iPad and no further comments on our crystal anniversary year.

Vivian strolls in. “I have a surprise for you in the dining room. Can you be there in five minutes?”

Chris and I glance at each other. I look back at Vivian and nod.

After unwrapping ourselves from our his-and-hers duvets, we trudge downstairs and are greeted with breakfast and an open laptop. Vivian has composed an email for us. I read her words aloud:

So there it is. This is what fifteen years of marriage looks and sounds like.

And I’m thinking it looks and sounds pretty good.