It’s four days until I’m done teaching for the year. The winter break will be here soon, possibly before I break, but not before I post more exhausted-teacher-memes to Facebook.

Then I feel it. 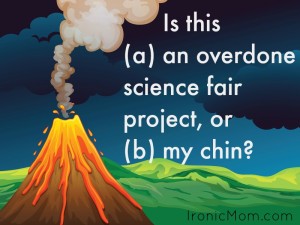 Like the head of a Xenomorph trying to escape my chin.

A too-many-chocolates and stress zit.

I touch my pimple, which is exactly what I’m not supposed to do, according to WebMD, whose Acne Visual Dictionary Slideshow should come with a not-suitable-for-viewing-ever warning.

“Look at my zit,” I tell my husband. “It’s like Bermuda is about to erupt.”  I share this with him because we’ve been married 15 years.

Chris looks away from the television and squints in the direction of my now-protruding chin. I’m reminded of the opening of The Kite Runner, which I read to my students earlier today. Amir, the narrator, describes his friend: “his tiny low-set ears and that pointed stub of a chin, a meaty appendage that looked like it was added as a mere afterthought.”

My zit is a meaty appendage, an afterthought.

My husband’s eyes flit to the Raptors game. Then back to me. I’m his afterthought, sometimes, and he’s mine.

Chris’ eyes lock with mine, then travel down to my chin and back to the TV. “In North Korea—” he says. Then he pauses.

A recovering librarian, Chris has two main reading veins: serial killer “light” fare and depressing crap, including all things Gulag and—lately—North Korea. In the past few weeks, he’s read Escape from Camp 14, The Orphan Master’s Son, and The Aquariums of Pyongyang.

“Is hearing about North Korea going to make me feel better?” I ask.

I laugh. So am I, I think, as I pour myself a glass of wine.