I’m pleased to bring you my first ever Whiteboard Wednesday Guest Post.

Chad Jones is a hilarious dad of two who I suspect sticks his foot in his mouth nearly as often as I do. He blogs about the bizarre (and slightly-less-bizarre) aspects of faith as well as being both a dad and husband. The guy can pen a sentence, so you should check out his blog, Randomly Chad.

But before you go gallivanting to read my Arizona pal’s blog, read his post below.

I’m a dad. Have been for a little over thirteen years now. Indeed, I
was in my twenties when my parenting odyssey began, and it wasn’t
until I was thirty seven that God decided to throw my wife and I a
curveball. Or drop a surprise bomb (in the form of a little girl) in
our laps.

I mean, up until then–when my daughter arrived–and it was just me,
my wife, and our son–in large degree, I still had “it.”

Somewhere in the five intervening years, I seem to have lost it.

What I mean is that in my mind, I have these perfectly formulated bon
mots of parental wisdom, of instruction and guidance, that somehow
become garbled as they travel the neural pathways of my speech center
(maybe an extra loop-de-loop in Broca’s area?), and make their exit
via my vocal cords and pallet.

To wit, the other evening–as is my practice–I cleaned up after
dinner, and was preparing to get my daughter ready for bed (which, of
course, includes showering and the brushing of teeth). In so doing,
she said “Up.” Meaning that she wanted me to pick her up.

Fine and dandy. I intend to enjoy picking her up and holding her until
she’s too old to want to be thus carried. Maybe when I’m old, gray,
and feeble she’ll return the favor. 😉

What wasn’t “fine and dandy:” her breath. It was rank. Ranker than
rank. It smelled like three-day-old Kung Pao cat turds left to ripen
in the summer sun had crawled in her mouth, and made their home there.
Yes, it was that bad.

What I intended to say (what I thought I was saying): “Sweetie, your
breath is really bad. Dragon-bad. We need to brush your teeth.” (She
laughed, and exhaled right in my schnoz. Whew!).

What actually emanated from my mouth: 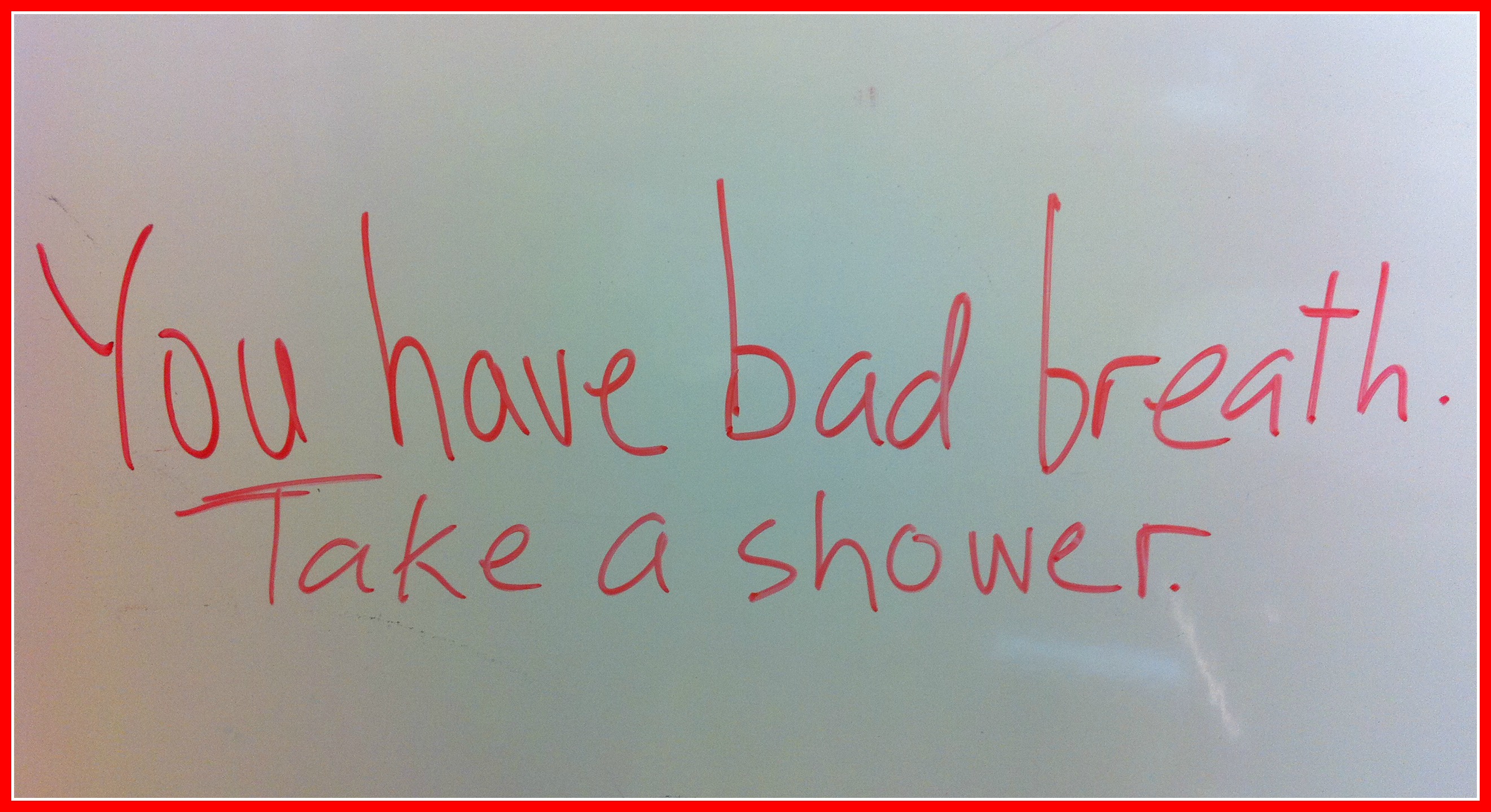 What bizarre things have you said or heard recently?