This morning, at 7 a.m., I was in the dental chair with my mouth cranked open as some medieval instruments threatened to give me a tongue piercing.

I don’t love the dentist. I can’t understand how engineers put men on the moon over 40 years ago (and decided to bring them back) but can’t make soundless dental instruments.

But the truth is I don’t hate the dentist either. I’d rather go to the dentist than babysit someone else’s kids. It turns out a lot of people would. You can see the evidence below, based on the sophisticated polling device known as Facebook. 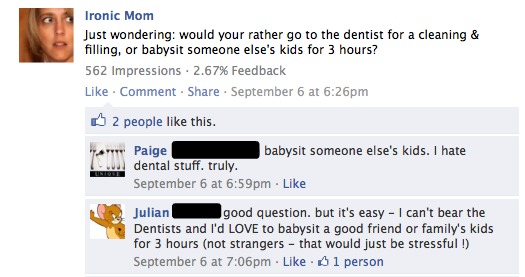 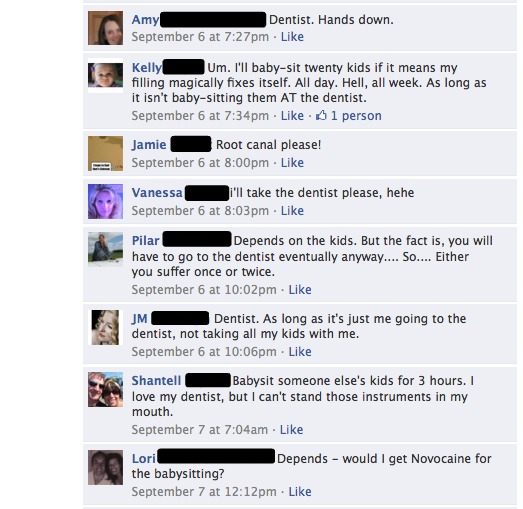 My kids love the dentist. Vivian likes getting a bag of loot at the end, which includes Lilliputian floss and toothpaste. William loves the cheap toys that the hygienist gives him after the flossing lecture.

More common, I think, are kids who don’t like dentists. Please click over to Stuff Kids Write to read the clear, concise note scribed by a five-year-old. And tell Chase and I your dentist stories there. 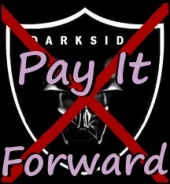 Also, the lovely and kind Kelly K launched this week–the days following 9/11–as Pay It Forward week. She encouraged all of us to do a random act of kindness for no reason other than to be positive. Ashamedly, I didn’t do much. I bought colleagues drinks from Starbucks, but that’s a fairly regular occurrence. My one out-of-the-usual act occurred during a fire drill at my school on a crisp and windy Calgary morning. I noticed one of my students shivering in short sleeves so I gave her the pashmina I had pulled around me. Before long, three girls had wrapped themselves in it resembling a wool scrum of sorts. Go to Kelly’s blog to check out her story (and others) of Paying It Forward.


I’m over at Rob Shep’s blog today as one of seven contributors about how to build community and/or increase comments on a blog. If you want to check out what I have to say or what the six other more clever bloggers have to say, click HERE. (And the ultimate irony is that I’ve turned off comments on this post).

Thanks for Triple Jumping with me. May your weekend be better than both a trip to the dentist and an afternoon babysitting people’s kids.