Trying to make time to see The Hunger Games with my husband reminds me of trying to get pregnant. First, he’s involved. Second, there’s an ovulation-like time crunch: I want to see the movie by Monday, the end of Spring Break. Third, all my friends seem to have done it already. Fourth, it’s something we’d normally really enjoy, but “having” to make time for it (NOW!) can be exhausting.

I’m pretty sure the sex analogy ends there. But if you want to spice-it-up in the comments section, feel free. 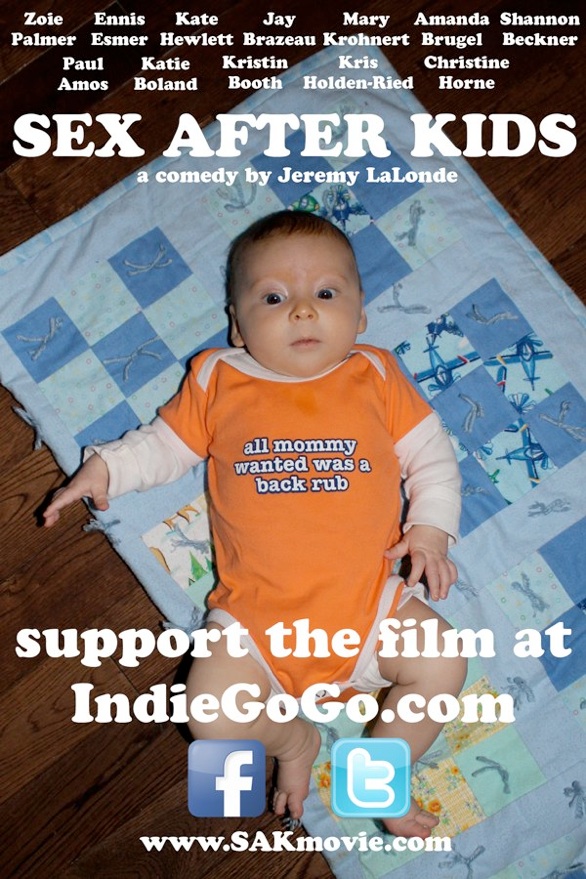 To get you in the mood, I invite you to click on the red link below. It’s a movie trailer for a film called Sex After Kids. Yes, it’s fiction. Sort of, not really, maybe. When I watched this trailer, I laughed so hard and long, I almost wet myself (insert your own joke here).

Sex After Kids is a bit like Modern Family meets The Office, but it’s brasher, sassier and (yes!) funnier. As my husband* says, “The writing is fantastic.” So is the acting. The film is also Canadian, and it is proof that we haven’t sent all our comedic talent south of the border. Yet.

At the end of the trailer, the writer and director of Sex After Kids, Jeremy LaLonde, asks for donations. This isn’t a plea for money; Jeremy has, in fact, raised nearly all of what he needs to move this project forward (though I doubt he’d turn down any more contributions). In an email exchange, Jeremy said that what he wants is to get the word out about this project.

So go watch it. If it doesn’t make you laugh, I will give you one of my children.  For a bit.

As a funny-ish Canadian who may have had sex after kids, I’m happy to support this project.**

If you enjoyed the trailer, would you consider doing any of the following (free!) things?

Thanks for supporting Canadian comedy, eh? We’re small, and though size doesn’t matter, it sometimes helps get the job done. Now excuse me, I’m off to tempt my husband. To go to The Hunger Games. We already have kids, people.

Footnotes:
*This from the man who claims I’m the third funniest woman he’s ever met.
**From the Department of Nothing-To-Disclaim Dispartment: I’m getting zilch for this post. I’m just one humourous artist-of-sorts trying to help out another.
***I know, again with the voting!

I’m not going to ask you to share your sex-after-kids stories (or those of your parents)…
though if you want to, go wild.
What I will ask you is this:
What was your favourite line from the trailer?
Have you seen (or do you plan to see) The Hunger Games?