This past Sunday, I once again tried to sleep in beyond 6:30, the time when my seven-year-old twins opted to wake.

“Just go play computer games,” I told Vivian. William was already safely absorbed in some violent cartoon on TV that was three inches from his face.

One hour passed. I wandered into the office.

“What are you doing?” I asked Vivian.

She stared at the monitor. She was filling in a form.

“Making Dad a card for Father’s Day,” she said.

Right. Father’s Day. My husband had left for work hours ago. We’d be doing our annual Throw-the-Spatula Competition later that day.

“Does it cost any money?” I asked.

The site seemed legit, so I took a shower.

When I got out, William was still inches away from the TV, this time staring at Sponge Bob, who was teaching him great adjectives, like stupid.

I continued to the office.

I walked closer to the monitor, pulling a strand of wet hair off my face.

I saw this picture. 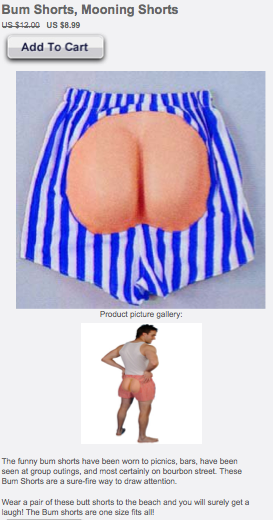 “I googled ‘funny gifts for men.'” Vivian looked up at me and grinned. “Wouldn’t Dad think this is hilarious?” she asked.

I checked the URL, www.gagsandgoods.com. Meanwhile, Vivian scrolled down.

I looked. And saw this.

Vivian was on a roll. She scrolled down some more. “What’s this gift for?”

I looked at the picture. 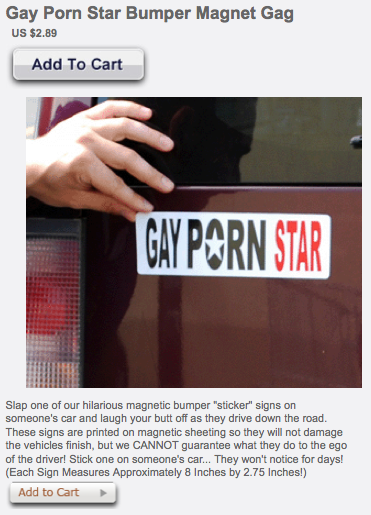 “Right,” I said. “Hey, you hungry? It’s time I make you some breakfast, isn’t it? Why don’t you bring that card you printed downstairs, and you can colour it at the table?”

I was in please-let’s-not-talk-about-this-now mode. I hadn’t even had a cup of tea.

Despite my frantic questions, Vivian continued normally. She clicked on the red x to close the screen, grabbed her freshly printed card, and followed me downstairs, pausing only to look at William and Squidward.

If you missed Vivian’s positive exploits on Google, check out Kids Using Google: The Pros.

What interesting images or sites have your kids (or you) accidentally stumbled across?